I bought an LED chimney / Santa motif from OO.  It has 3 channels (one for the chimney & body and two for the leg pairs) and comes with a 24Vac plugpack and MFC.

After cutting the MFC off, I wired the 3 plugs to a 4-core cable that runs back to one of my controller cabinets.

As per some of the other motif mods I’ve done (like the LED Stars), I used 2 x 1N4001 in series with the common +ve wire to drop the 30V down to about 28.5V so it’s close to the original brightness. 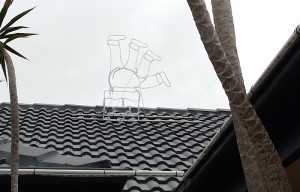 Here it is mounted up on the roof. 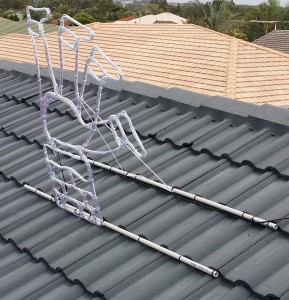 I cut 2 lengths of 20mm PVC electrical conduit and cable tied them to the main frame and stand.

The conduit pieces are 1500mm each, but a little longer wouldn’t hurt.

I found that a spread of one tile between the frame and stand allowed the motif to stand fairly vertical. 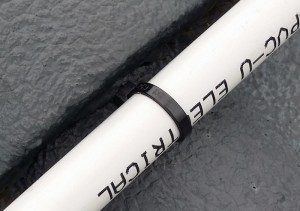 Medium thickness cable ties are attached to the conduits in several places.

Make sure you don’t tie around the LED rope light itself though.

The uncut tails of the cable ties are wedged under the tiles in several places.

A large flat blade screwdriver was used to carefully left each tile up to slip the cable tie under.

I started with 200mm ties, but also used some 300mm ones to go further under each tile.