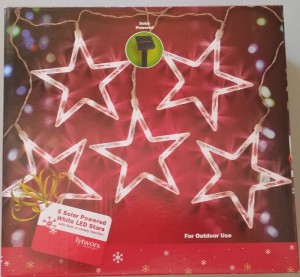 I bought a couple of these Lytworx solar stars sets from Bunnings in 2012.  They don’t seem to sell them anymore.

Anyway, as solar lights they suck.  They’re not all that bright, don’t run for very long each night and the Ni-Cad battery dies like most solar items.

So I thought why not mod them to run from a standard DC controller and use them as part of my Christmas display.

As long as I don’t dim the controller’s (PWM) output I can get away with a small DC-DC converter like I’ve done with other mods in previous years.

Interestingly (and annoyingly), each set of stars is a slightly different white.  One is bluer than the other.  Oh well, we’ll call that a feature! 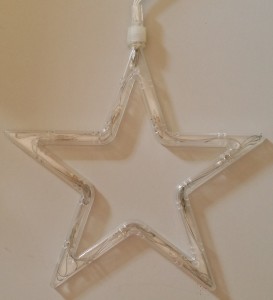 I removed the original solar panel / controller and hooked the bare stars up to a variable power supply with the current limit set to 150mA.

The positive wire is the one with the knot in it (inside case).  It also is not tinned wire so has a copper colour.

Starting from zero, i slowly increased the voltage until the stars were a reasonable brightness.  Because they are all wired in parallel (no current sharing resistors) we’ll keep the current well under what you’d normally use for a standard LED.

At 2.95V, the total current drawn was 100mA.  That’s only 2mA per LED which should keep the current sharing under control. 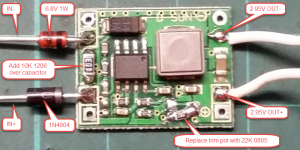 The chosen (for its size) DC-DC converter has a maximum input voltage of 28V, so a couple of changes were required to safely run it from the 30V channels on my DC controller.

A 6.8V 1V zener knocks the incoming voltage down, while a 10K (1206 size) resistor across in converter’s input capacitor ensures that the zener has current flowing (and drops enough Volts) at start-up.

A 1N4004 diode offers reverse polarity protection.  The converter ends up with 22.5V on it’s input.

I wired each set of 5 stars to its own DC-DC converter and into a Big W plug so they can plug in to my existing wiring harness.  Some heatshrink and silicone makes the converters weatherproof (I hope).