I had an idea for a Halloween prop along the lines of a creature in a containment unit.  A small screen would show the vital signs of the creature.

While pondering the use of a raspberry pi and small car monitor for the screen, I thought about the video capabilities of a digital photo frame.

Some are only good for showing slide shows of still images, but some can play video content and have an inbuilt speaker.

It’s a little fussy on the video format, but re-encoding the chosen video in Handbrake (as an mpeg 4 file) solved that issue.

One nice feature is the ability to set it to start playing (looped) videos when power is applied.  Check the option menus of your frame.

The video file shown below was only $5 USD from Pandemic Haunt Production.  There are several videos included in the set.

Be aware that older digital photo frames may only work with SD cards 2GB or smaller in size (not SD-HC or SD-XC). 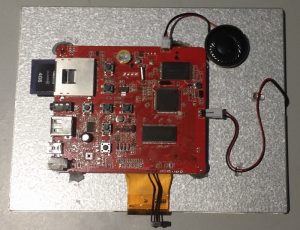 LCD, circuit board and speaker removed from plastic case.

Circuit board and speaker hot melt glued to the rear of the LCD.

Short plastic spacers were embedded in the glue.

This spaced the board neatly from the LCD and prevented shorts. 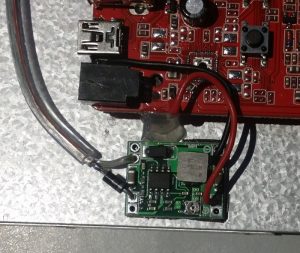 A small buck regulator board drops the incoming 12V – 24V down to 5V.

It’s attached the the back the the LCD with some thick double sided tape.

The 1N4007 diode on the input cable protects against reverse polarity.

A test fit in the clear lid of the plastic enclosure it will go in.

Unfortunately there is a molding mark / stub in the middle of the lid.

I cut away as much of it as possible so that it didn’t poke the LCD.

I now need to mask off an area in the middle and paint the rest black.

This will hide the LCD frame and inside of the enclosure. 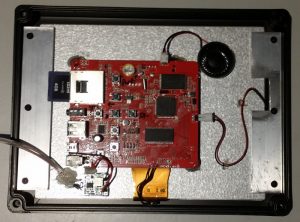 A couple of brackets cut and drilled to hold the LCD to the front. 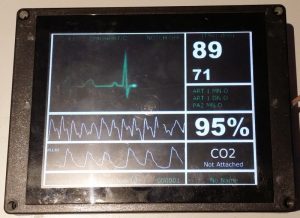 The inside of the clear front was painted satin black.

I masked the area for the LCD using a piece of paper and double sided tape.

A small spot was scratched in the paint on the lower edge.

That’s so the remote control receiver has a clear view.