This prop is super simple and costs next to nothing to make.  I used a 15L white plastic container left over from paint preparation.

Another source of containers is commercial cleaning companies as they get detergent in similar 20L containers. 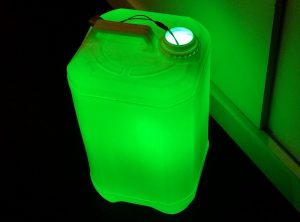 A test with 3 high brightness green LEDs and a battery pack.

The illumination is surprisingly even. 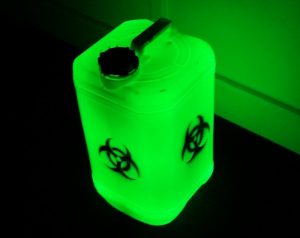 This time the illumination is through the bung near the bottom.

The biohazard symbols were done with a paper stencil and black spray paint. 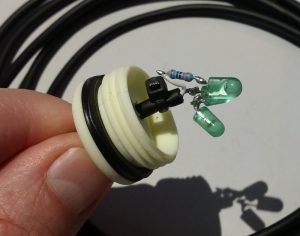 The 3 LEDs and resistor are on the inside of the screw-in bung.

A small hole was drilled in the bung for the cable. 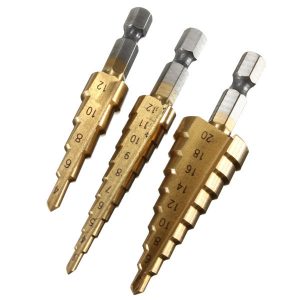 The small hole in the bung recess is too small for the LEDs to fit through.

A step drill can be used to drill it out to 20mm.

You can buy a set of step drill like these for less than $10 on eBay, etc.

They enlarge the hole without making a mess of the bung recess thread. 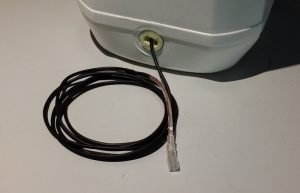 A 2 metre cable and 2-pin male connector tail were added.

This is for connection to my 12V power system.

The pulsating effect was achieved with a $1 dimmer module off eBay.

I got a second container from a cleaning company and did the lighting a little differently.

400mm of RGB strip bent in half and stuck together with double sided tape.

Only the red and +12V connections were used. 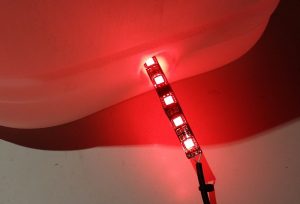 The 200mm length is inserted into the bung hole of the container. 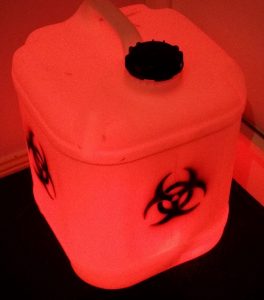 The light coverage is quite even.

Here’s what it looks like with the cheap LED flasher / fader  running it: 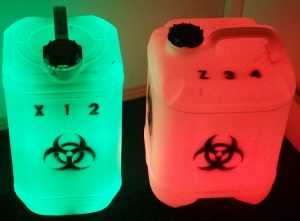 I ended up redoing the first container with green LED strip.

The green colour is more saturated than it appears in this photo.

I also enhanced each container with some 25mm alphanumeric stencils. 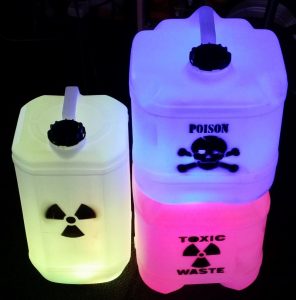 The left one is yellow, top right is blue and bottom right is red.

A lot of these style containers are stackable with a 90° turn.