I bought these DMX modules a few years ago.  They were available in 5V, 12V and 24V versions.

For some reason I bought the 24V version, but had used them with 12V lights and power.

They seemed to work ok most of the time, but would occasionally fail to start.  Some testing revealed that 12V was barely enough to run them.

It turns out that the internal 5V regulator did not have enough voltage on its input to work correctly due to a resistor placed in series with it.

Anyway, the mod to change them to 12V operation is super simple. 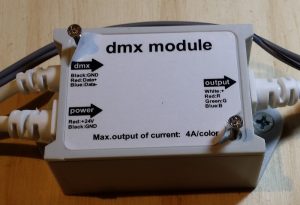 Peel back the sticker to reveal the two lid screws.

Undo them and remove the lid to reveal the PCB. 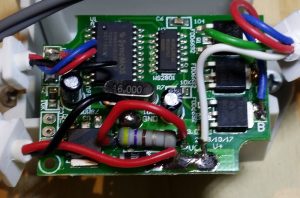 At the bottom of this picture you can see a large 470 Ohm resistor.

It is in series with the incoming positive supply lead.

I have used a piece of wire to bridge over it.

The module is now suitable for operation in the 9V to 12V range.

I marked the lid with “12V” to remind me that it has been modified. 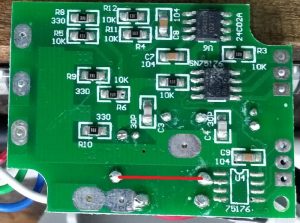 Instead of linking the resistor on top, you could bridge

the 2 solder points as indicated with the red line.