Today I decided to use some pallet wood to make a ground breaker coffin.

The overall idea is that the coffin has popped part way out of the ground.

Most of the structure is done.

I screwed it together from the inside where possible.

A jigsaw was used to make the “broken” cutout. 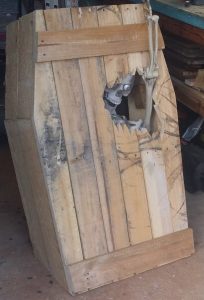 I went back and cut the bottom section at an angle so that it leans back.

Some LED modules will be used inside so the skeleton can be seen. 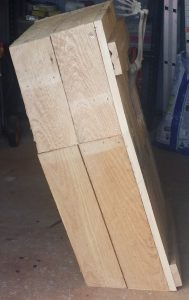 Even with a fair lean, the prop is still quite steady on it’s base.

Once it’s complete I’ll see if it needs a fold out stay to keep it from tipping. 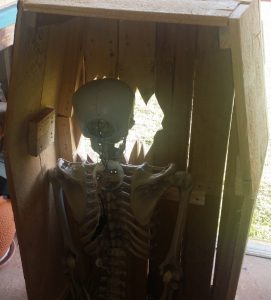 The skeleton will be secured in place.

Some scrap timber was used to join the side layers.

I cut down the pallet rails to join the sides to the front.

The rear (bottom of the coffin) will be ply as it won’t really be seen. 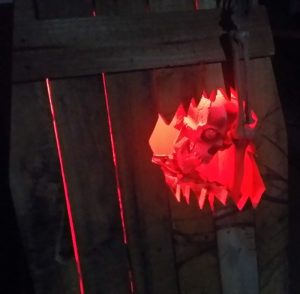 Three 12V RGB LED modules have been fitted at the top, pointing downwards.

This was just a quick test to see if that was enough. 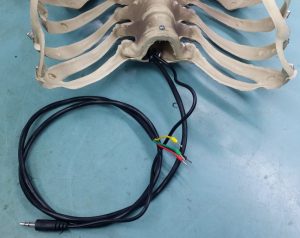 I’ve added a cable tail to the skeleton.

The red and black are the 4.5V power feed (no batteries)

The green and yellow go to the “try-me” button connection.

For this prop I’m not using the 3.5mm aux audio input cable.

The prop is controlled with my try-me prop controller.

A DC-DC converter drops the incoming 24V down to 12V.

That goes the controller as well as a socket for scene illumination.

The controller powers the skeleton and triggers its try-me input.

It also controls interior and exterior LED lighting when activated.

Activation is via a PIR and/or a RF remote control.