This one was made with pallet wood but is around 800mm x 800mm to match the house bricks.

The hands (both left – oh well) were from an eBay seller and are about $4.75 each including postage. 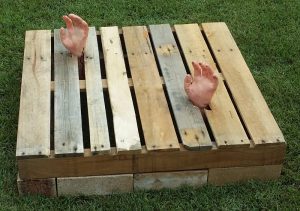 The wood frame simply sits on top of the loose bricks.

I bashed a couple of  rough holes for the hands to emerge from.

I’ll be adding some LED lighting under it to show through the gaps.

A separate LED light will illuminate the scene. 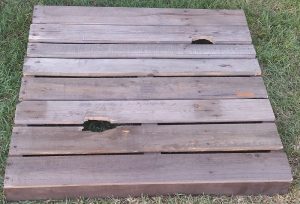 A white vinegar with dissolved fine steel wool solution was made up and left to sit for a week.

The original 1 litre of solution was topped up with 1 litre of water to thin it out.

I brushed the solution on once or twice depending on how light the raw timber was. 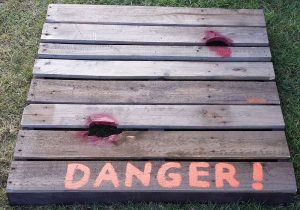 Some old red automotive touch up paint (two different shades) was added around the arm holes.

A bit of left over (sample pot) paint came in handy for the DANGER! text.  Gotta love free stuff ! 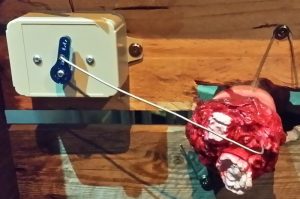 The arms were secured with some fencing wire.

A single piece skewered each one.

The ends were trapped under screw heads.

Notice how the pivot angle is roughly 90° to the motor wire. 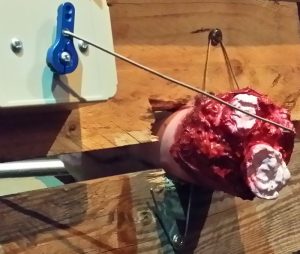 Another piece of fencing wire connects to the motor arm.

The fake arm end is bent a little over 90° to stop it dropping out.

The motor end of the wire went into a new hole drilled in the blue arm. 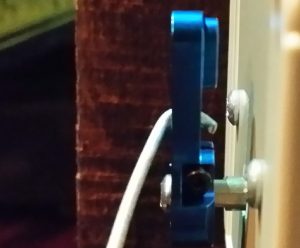 You can see how the wire is hooked back a little to keep it in place.

Some fiddling was required to stop it binding against the underside.

Night shot of it running with the RGB LED strip and audio track: 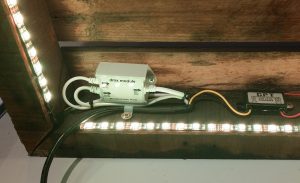 After Halloween night I fitted a new LED strip.

The used piece I had in there had a few dead sections.

It cycles through colours when no DMX is present.

The DMX input was wired to the 4 pin power cable

so I have the option of DMX control at a later stage.